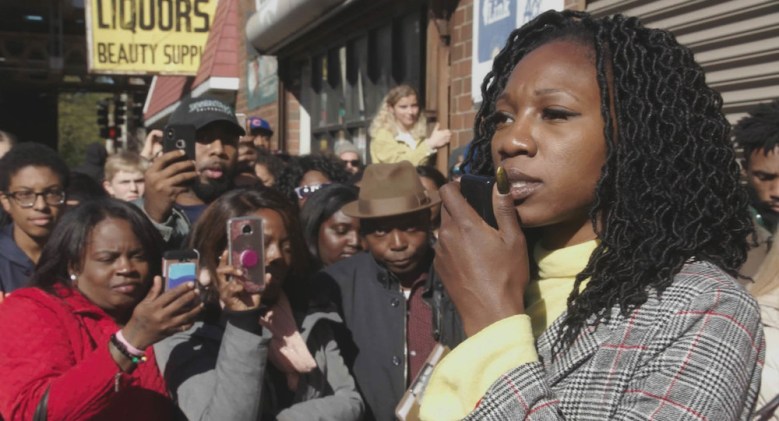 Waiting in the Q line, I was shivering at the slight chill of wind. Suddenly a charming older man gave me tickets as he walked in. I thanked him graciously and thought, “What a kind random guy.”

I entered the venue and the announcer introduced Steve James of the four-episode documentary series, City So Real. Fans were present in the audience of his past films such as Hoop Dreams and The Interrupters, eager to see the world premiere of his latest work. Imagine my surprise when the same kind random guy from outside walked onstage to introduce his film.

The four-hour-plus piece was worth every minute. City So Real guided the reader through each county in Chicago with thoughtful transitions and helpful graphics that pointed out the counties using a map and label. The film opened with beautiful music and text over each sequence highlighting the city’s aesthetic until it was ultimately written, “A pleasant moment in history that needs to be popped open and read.”

Across four episodes, James’ piece objectively captured the city’s demand for then-Mayor Rahm Emanuel to not run again as well as the campaign of 2019 mayoral candidates.

The first episode introduces all of the running themes in the film, including racial division between the north and south sides of Chicago and the case of former Chicago Officer John Van Dyke — who shot teenager Laquan McDonald 16 times — as well as other matters of social justice. The second episode introduces the gentrification of Chicago and two major candidates. The third episode brings us to the ballot, the debates and the early vote while introducing more candidates. The fourth episode majorly focuses on the end of the race.

It is evident the director had an objective to capture the culture of Chicago as if you were a citizen living in it while watching each episode. He creatively uses a subtle theme to indicate “safe” neighborhoods: A dog walking. A gorgeous lake sequence also treats viewers to the authentic sound of Chicago and its beautiful, often mistreated, African American community. Mayoral candidates and everyday citizens alike were interviewed. This, at its heart, is the story of Chicago.

It was noticeable that the director focused on the black candidates more so than the white, which was refreshing and made for a diverse outlook. Not only did he focus intently on characters, but he also highlighted the scenery and body language of his subjects.

A cinema-like scene from the third episode follows mayoral candidate Amara Eniya on a nightly jog through her neighborhood. Voice-overs of news inquiries regarding her qualifications play, sowing doubt during the race.

Although this film substantially benefits outsiders of Chicago, it would bring the most pride to Chicago locals — to recognize the same spots that you grew up in and view them through a 360-degree lens is a privilege that James has granted his community in this film.