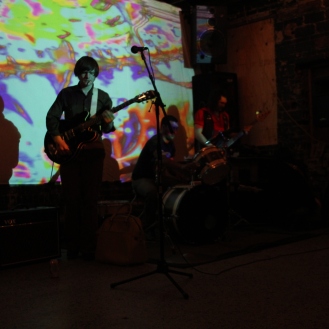 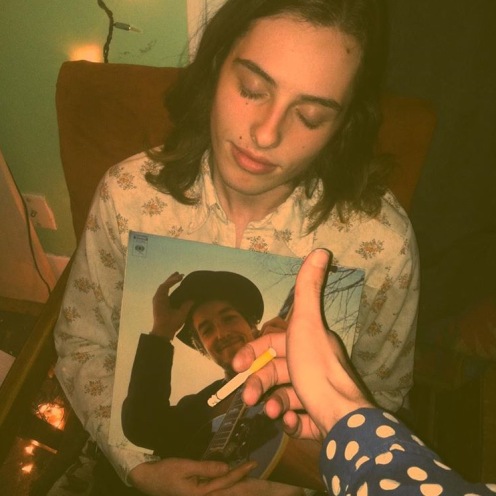 “[We chose Leon Russell] Because he is a Tulsan musician who made it. He played with Eric Clapton and J.J Cale, like they made the original Tulsa sound,” Hurley said.

“And now there is a new Tulsa sound coming out soon.” The Shelter People’s bassist, Garon Burch, said referring to his band. 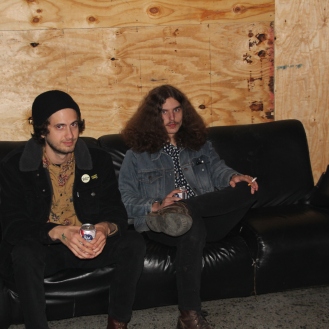 The Shelter People are a flash from the past who live and breath in present day Tulsa, Oklahoma. Everything from the sounds of their electric guitars to the clouds of smoke surrounding their photos scream 70’s rock. Their sole purpose is simple.

Their objectives run deeper than just rock and roll, however.

“Get people driven man,” Hurley said. “We want them to walk home with an experience, something that only their parents and grandparents have talked about.”

“Just that good feeling that draws you back in for more,” Mathias said in addition to Hurley’s statement.

How this band came to be is a whole other story within itself. Their music started as a duo between Burch and Hurley who attended the same high school.

t’s in two weeks’. So me and [Garon] had two weeks to write songs and get a whole set ready and then we played at the Vanguard that day.

People seemed to like it so we kept going with it, and that band was called ‘The Flood’. We did that for two years until we decided to go solo and do our own thing. That was probably 2015,” Hurley said

Mathias came along some time later and inspired the former band’s reunion, which sadly did not last. Under a separate name, the band members still had a similar sound to what they play now due to their inspirations and song choices.

“I got Dakota’s number from a mutual friend, and he said we were into the same style of music. So, I hit him up and we met at a party and we jammed and everything went pretty well. I helped him out with one of his projects. Then we actually got The Flood back together as a four piece instead of a two piece and it just kinda fell out.

It wasn’t really a defined sound so we went our separate ways, again * Mathias laughs*, and then we all got back together and had a similar concept of what we wanted to do with music. And that is what we are trying to pursue now,” Mathias said.

No one can define The Shelter People’s musical aura better than the band themselves.

“In short, we’re just a rock and roll band, but if we had to branch off I’d say we’re hard rock, blues, psychedelic, and we take a lot of inspiration from the late 60’s early 70’s rock bands that were just killing it at the time,” Hurley said.“And a lot of early blues music too,” Burch added.

H- “Howlin Wolf, even like a little bit of BB king”

The band’s influences have a clear rub off effect on the music style they produce. They spew out sensations that match the very birth era of rock and roll. Even their performances set the atmosphere to match psychedelic rock concerts and shows from past decades. Apart from the destruction of their instruments, I have yet to witness that from this young up and coming band.

When asked where their aesthetic which matches the period they, as earlier mentioned, depicted came from, their bassist had a direct response that may help others who are looking for similar threads to partake in.

The rest of the band laughed at this response and how true it was. Their lead singer gave a more thorough explanation for the reason behind their unique style.

“We’ve actually already kind of dressed this way since day one. We just all kind of wanted to show ourselves off, and we were always into the 70’s aesthetic. But we shop around where we can find anything that looks good to us,” Hurley said.

I remember attending one of their gigs a while back. It felt as if my sister and I had stepped through a time machine. There was a light show which projected groovy colors on the floor-set-stage and around the bar. The venue did not have a name, although it was packed. The fact that it was so crowded could have been due to the free beer they were providing, however, I choose to believe it was due to the band’s success and familiarity around town. 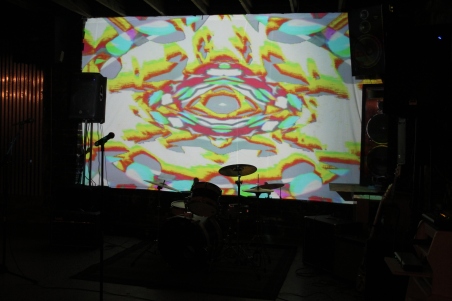 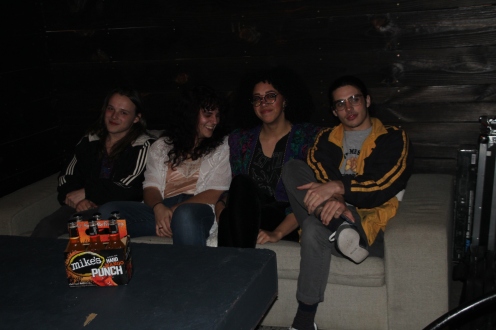 Hurley explained the growth of The Shelter People, and how it came to be.

“It was really quick and surprising, because whenever me and [Garon] were playing high school we played for a year or two and never really went anywhere,” Hurley said.

Therefore, when The Shelter People gained as much attention as they did, it was a completely different and alternating reaction.

“We put out a single called “Going Back Home”, and it really caught on with a lot of people. Somebody from Germany or something bootlegged it and put it on youtube and it has already got over 1,000 views and we just put that out a couple months ago. After that, we have just been invited to keep playing and keep playing,” Hurley said. 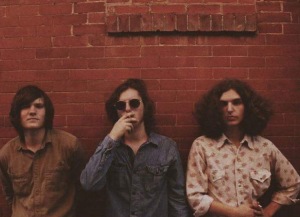 So, what is the secret to staying so relevant and popular for local bands such as The Shelter People?

“Honestly, if you want fans to notice you, you’ve got to stay active on social media. It’s a must. I know a lot of bands tend to not give much attention to it,” Mathias said. “Or they just forget really. And that is one thing that we are starting to do now is always be on social media, show people what we are doing, and show people what we are about to do. Just stay on it and keep the people informed,” Hurley added.

The Shelter People’s talent and authenticity also contributes to their fame. As a fan of their music, this comes as no surprise to me.

“I think the fact that we play a very retro style of music that young guys like us, or people in the music scene at all don’t really tend to have a sound like that. So, I think that we are different from most other local bands because we have such a unique sound,” Mathias said.

“I think that it’s something new and fresh for especially the Tulsa music scene. There are not a lot of people doing rock and roll in general,” Burch said.

The band’s merchandising sales and promoter, Mac Fears, is a direct witness to their feedback from their past shows and other music personas in the local area. Fears noticed how The Shelter People stand out in comparison to the crowd of other artists on the scene right now.

“[Rock] is definitely dying out, for sure, in a sense of locally. With what the guys are doing, everybody is starting to catch on and they are realising that it’s still good music and that it’s not dead and that if you just have the inspiration and the drive to do it then you can do it,” Fears said.

The rebirth of a generation is coming back to Tulsa, and that Rolling Stones bandwagon will be lead by The Shelter People. In the eyes of the band’s lead singer, no one else is bringing back that good ol’ rock and roll. The sound is being flooded by other new genres, which is not bad, but it causes audiences to forget the roots of great music.

“It seems like locally with all of the young bands now, what separates us from the rest is there either doing indie, metal, or rap and I think that everybody has already listened to that. We are just trying to get people to listen to rock and roll again,” Hurley said.

The band announced that in April they will be in the process of writing new songs and releasing an EP soon.

“We are going to hopefully press it to Vinyl do like a 45 double, and promote the hell out of that,” Hurley said.

The process that goes into their music is a shared experience. Each member plays a part in the writing process and jam session in order to contribute.

“[The writing] is mostly all of us. [Dakota will] come up with a guitar riff and I’ll follow it on bass,” Burch said.

“They mostly start off as jams, they are not really written out,” Hurley added.

H- “Yeah, we record all of our jams and then we go back and listen to them and we are like ‘Oh that’s kind of cool’ or ‘That sucks’ and we just choose the best ones and we try to work off of that.”

The Shelter People’s music comes from pure, on the spot, jam sessions that are in the moment. After getting cleaned up, they are then made official. But it is scratching the surface of improvisational art, which is how the most legendary pieces are made.

“But it all wouldn’t work without the three of us,” Burch said.

“As a three piece, you know, one person can’t write a song. It’s the whole band that writes the song together and that’s the reason that our music sounds the way it does,” Mathias followed.

Burch further explains how the roles are set up, and how nothing is assigned to a specific bandmate.

A free range creative brainstorming session that does not even feel like work, just a couple of bros getting together and rocking out.

“There’s no rules on how we do things, we just do whatever and figure it out,” Hurley said.

Fears provided the domains and ways of contacting them. Check out their social media and follow them to find out upcoming show times. Also, there are some videos in the works from previous performance, so watch out for that.

We discussed the end goal of The Shelter People, and where they hope this band will take them, how far it will go.

“We want to make some records, tour around the world, and sell some records” Hurley said.

When I asked if the band had any last words, a message to their audience and other audiences who may be reading this profile they had this to say.