“ A wave of pajama surf because I write everything in my PJs,”said Jay Derubeis, The Girls Room electric guitar and lead vocals.

Their name? “There’s like two different meanings,” said Derubeis “I used to grow up watching The Amanda Show, and I loved her little segment ‘Live from The Girls’ Room’ do you remember that? That was like my favorite segment. The other reason, honestly, I’ve done so much bonding in the girls literal bathroom, and I love the friendships that have lasted. Even people I have met [from] shows in the bathroom, and they recognize me. It is such a great feeling. Plus it’s all guys [in the band] so it’s funny.”

So, how did it all begin? “My previous band the Done Duns, which 40% of these songs are still from that band , broke up,” said Derubeis “I found out over a voicemail after the best show of our lives. I thought I would never play with somebody again. I was so afraid to play with anyone else because I was self taught. I decided ‘forget this’ I’m just going to start adding people on Facebook I don’t even know that play music because at that point my circle was not an option anymore.

Looking at mutual friends, she came across Pete Hess. They had seen each other around town at different shows, but never officially met.

“I messaged him,” said Derubeis “I think I was a little drunk, and I was like ‘Hey, I know you don’t know me, but my band broke up a few months ago. I was just interested in finding new members to play the songs that I still have. I don’t know how to jam’ and he was like ‘Yeah!’. At that point it was another three months before I got the courage to meet someone else. Then we met Po who Pete has known for a long time. Po came over to deliver Pete’s computer. [Po] is like our gear guy, he can fix anything he is a genius. [Po] happened to have his bass in his car, and he was like ‘Can I just sit here and play with you guys?’ and we were like ‘Yeah!’ and all of a sudden I had two out of the three people I needed.” 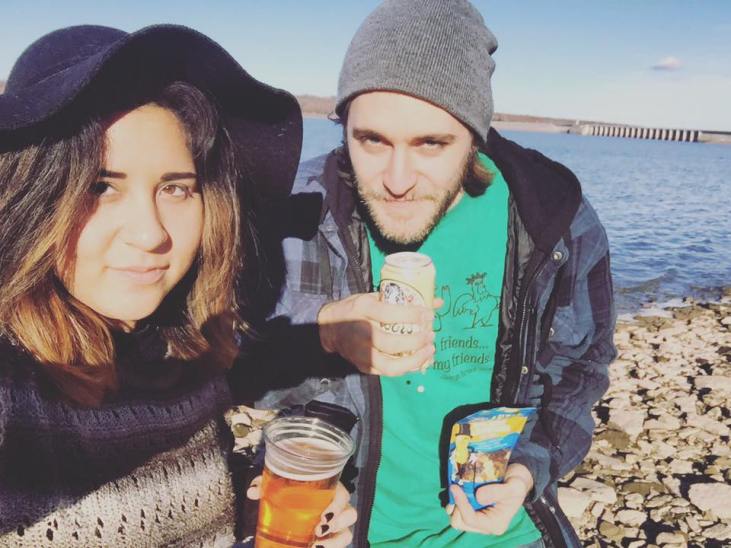 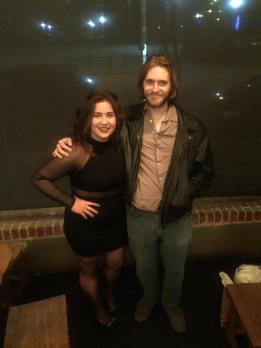 They went through six drummers until they met their drummer, Ramsey. Derubeis contacted him through facebook, and after one jam session they were hooked.

“For once it wasn’t double bass metal, or awful drumming. It is also good to hear the songs like they are supposed to be,” said Derubeis.

“We have been a band for over a year now, we just randomly met up networking,” said Hess “The chemistry has just been dynamite from the get go. We both had just come out of a pretty rough patch of people and places we were living and just a lot of similar

situations. [Derubeis] just came over to jam, and it was very natural. We talked for like five seconds, and it was like we’d known each other our whole lives. We’ve been siblings ever since.”

“I actually knew Pete through work,” said Hendricks “I worked at guitar center with him, and I worked on his guitars and amplifiers. I loved guitar center, did my own thing for while, and one day out of the blue he was like ‘Hey, I remember you were talking about wanting to join up with a really cool kind of surfy band. You should come jam with us.’ And first time I played with them I was like ‘Yup, this is it.’”

Derubeis has three jobs on top of being the lead singer and rhythm guitarist of The Girls Room. As if that is not enough to make your resume pop, Derubeis is also a member of an all girls rock band called Planet What. The two bands she plays in differ on many sides, other than just gender.

“It’s almost like I get pushed harder in The Girls Room because they are all so very skilled in theory, and they know so much more than me,” said Derubeis “Don’t take any of this negatively, but I don’t want to mess up more in Girls Room. I don’t feel very comfortable going off. I do that on my own when I write the songs, and that’s nothing bad that’s just our process.” 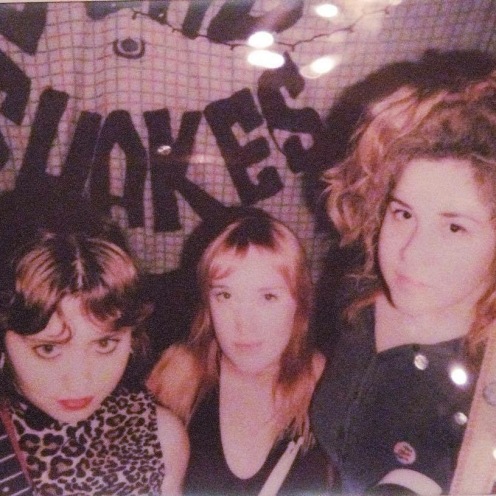 Derubeis brings the skeleton of the song while the other members of The Girls Room add their stuff to make it what it is when they perform live. Whereas in Planet What, Derubeis does not have as much control over the band, just enough to play a key role in their development.

“Kylie, Amy, and I have been in each other’s circles for six years musically, and never spoke to each other,” said Derubeis “If you would have told us that we would be playing in a band together in how many ever years we would laugh in your face, but

even from the first practice it was different. I felt very comfortable to mess up, nothing sounded good, but it was cool, that is something I would never be able to do with Girls Room. I guess there is some ownership or responsibility I have for The Girls Room because I’m running everything, and they don’t write any of the songs.”

The different dynamic between the bands lay in gender, leadership, and even practice times. The Girls Room have separate lives and schedules that only allow them to meet for 45 minutes at a time to maybe an hour. Between Derubeis’ three jobs, Po transitioning to Fayetteville, and Hess juggling another band that he front runs along with his job in the band… things can get crazy.

“I commend [The Girls Room] for being there for practices,” said Derubeis “We are all busy too in Planet What, but we just make one day a week and we practice for like eight hours. We just go and go and go. I’m also not the front woman all the time. It’s such a cool experience to play a different role like that, at least for me. I got the best of both worlds somehow.”

Derubeis is not the only member in her band that experiences the ‘best of both worlds’ dynamic. Their lead guitar player as mentioned earlier is the front runner of his own band as well called The Danner Party which has played everywhere in Tulsa at least once. Hess also co-runs a band called Carlton Hesston with his band mate Alec C. Hill.

“ [The Girls Room] started off as a side thing for me because I’m in Danner Party as well, and that has been my main thing. I told [Derubeis] I would just do whatever she told me to play, and she never said a word and just let me come up with all my own parts. It all worked out well. Jeanette writes all of the music. I just show up and do what I’m best at, and try not to make an ass out of myself” said Hess. 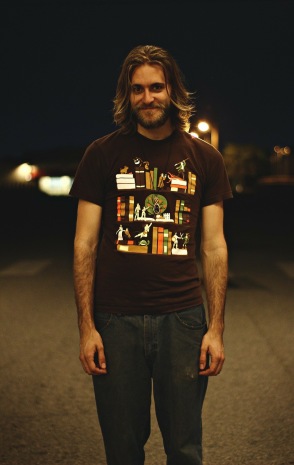 What differs from Girls Room when compared to Hess’ other bands is similar to what differed in Derubeis’ two band dynamic. Being a band leader and a band member have two very different vibes attached.

“As far as Danner Party goes, that’s my group and it’s a lot of responsibility,” said Hess “It is more of a band leader thing. I’ve gotta listen for every mistake when we play, and

do a lot of the booking. Now, the other guys work pretty hard as well, I don’t want to take all the credit, but everybody pulls their weight. [The Girls Room] it differs because I can just show up and do what I’m best at. I can just add, and not create the substance. Approaching things as a lead guitar player and approaching them as a central part of a band is a completely different mindset. I can drink way more in this band when I play.”

Other differences between The Girls Room and Hess’ other bands are more sentimental.

“Honestly, I would say this band differs more from other groups I have been in, cliche as it gets, because it’s family,” said Hess “Most of the groups I’m in, I mean we take care of each other, but we all pretty much do our own thing. This group specifically, everybody does everything to take care of each other.”

Their bass player, Patrick (Po) Hendricks, has other projects going on behind the scenes as well that involve taking care of his band mates directly (more specifically their instruments). Hendricks, as described by his band mates, is a human pocket knife who builds amplifiers and guitars.

“It is really my only solidified project,” said Hendricks “I have always been kinds of a hands on [guy]. I want to know why it sounds the way it does. I have always taken things apart since I was tiny. The reason I actually got into repairing and building was because the band I was in before this was like a thrash noise band, and I broke a lot of [stuff]. A lot. I got really tired of paying people to fix it, so I just fixed it myself.”

who can fix their own instrument.

“It works out because I break my [stuff] in the weirdest ways” said Hess.

Hendricks finds the arrangement to be pretty convenient himself as well as rewarding.

“I understand that musicians don’t really make a ton of money,” said Hendricks “So, if I can help them out and I get to enjoy what they make out of what I make then it’s a symbiotic relationship. I love every minute of it.”

The Girls Room performs all around the central region. Most of their shows are Tulsa gigs at The Yeti, The Beehive Lounge, house shows, The Fur Shop, and even some shows in Fayettville. When asked what their favorite part about performing was, Hess had this to say…

“The rawness, I generally prefer our gigs where we can’t hear ourselves very well, and just have to put a lot more energy into it to compensate. The sweaty dirty feeling, it’s impossible to describe,” said Hess.

What can we look forward to in the future for The Girls Room?

“We just recorded a single, it’s out on bandcamp right now. We are going to start working on the rest of the album immediately over at Oak Wood Studios with Adam Woods. We are going to put out an album, hopefully put it out on vinyl, and take it on the road,” said Hess. 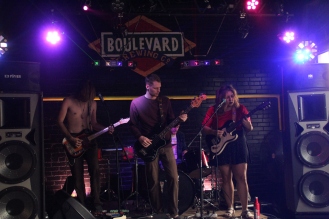 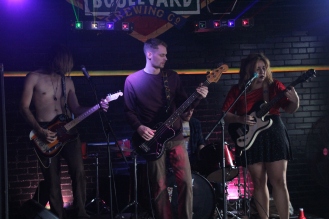 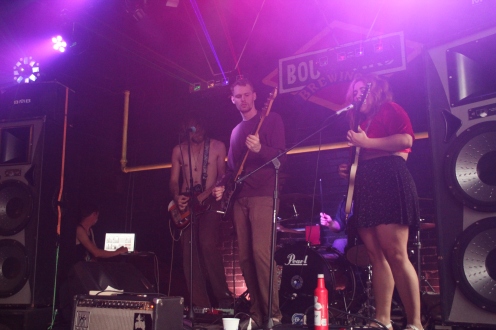